I have always been fascinated by puzzle boxes. When I was little I used to draw up very simple designs, but lacked the tools and know-how to actually build them. I got distracted with high school and the idea wandered off into the back of my mind where stayed for about a decade….That is, until it resurfaced a week ago.

I had come into possession of a box (a shipping crate, to be exact). It was clear to me from the moment I laid eyes on it that this was no ordinary box, that I loved it, and that a man could do great things with a box like that. I wasn’t quite sure what I would do with it, but I knew it would be good.
My first idea was to spray-paint a chessboard on the top. After a mask had been made out of an unreasonable amount of painter’s tape, the board was sprayed and there was much rejoicing. 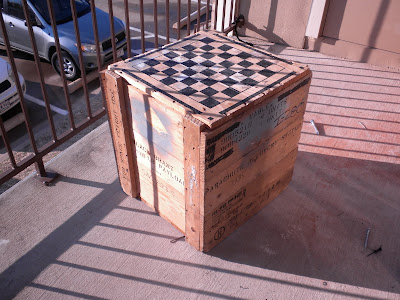 I don’t remember how I arrived at the idea, but about six months afterward it occurred to me that I could modify one side of the box to have a hidden sliding panel which, when moved, would allow the whole side to open out. I drew a fancy picture on my desk to cement the idea: 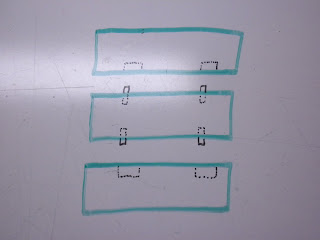 I was a little worried about tearing into my most beloved box, but the idea seemed simple enough, so I promptly began ignoring the upcoming week’s midterms and began construction.
The hardest part of the whole process was actually removing the panels from one side of the box. Shipping crates don’t look terribly inspiring, but this one was really well-built. Some of the nails could be pried out, but many were buried in the wood and I didn’t want to risk splitting the planks with a crowbar. I ended up having to use a hacksaw blade between the joints to cut most of the nails holding each plank on. This took some time. There was also a 2″ thick sheet of foam insulation glued to the inside of off three planks, complicating the process. 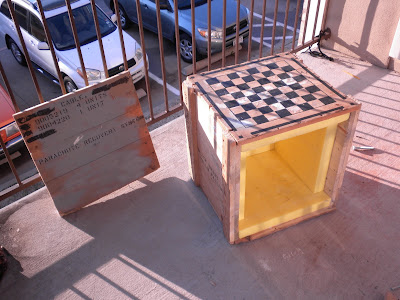 Once the planks were removed from the box and separated from each other, things went pretty quickly. I drilled holes in the middle board for the pins, and cut mortise grooves in the other two boards using a drill and dremel. 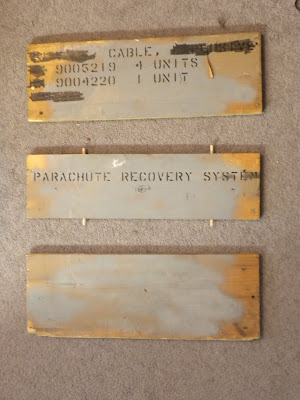 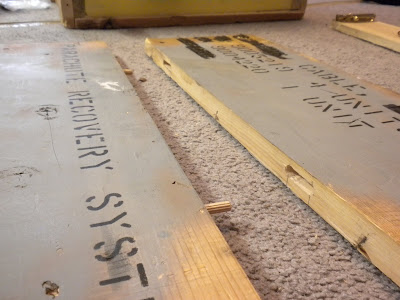 The three planks would eventually act as a door, so to give it some rigidity I connected the upper and lower planks using two 1×4′s. This allowed the door to stay square while sandwiching the center plank in place. I found some concealed cabinet hinges at Home Depot, but they didn’t travel outward quite enough and I had to remove some material from the inside edge of the box so the door would open completely. 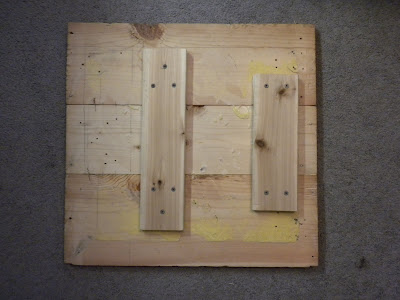 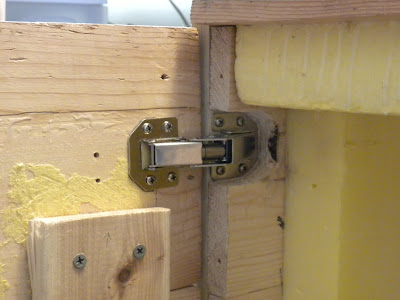 Unfortunately, the door won’t open with the center plank fully translated for the same reason I had to remove material in the inside edge. I considered removing material from the adjacent side to make a recess that the overhang of the center plank would fold back into, but my friends informed me that this was lame since it would be very obvious that the box had been tampered with. Instead we decided that it would be okay if the center plank was slid out once to release the bolts and open the door slightly, and then slid back in to open the door entirely. This was the only real design decisions I wasn’t sure about, but in retrospect I think we really made the right decision here. If anything, the added step adds to the box’s charm, though you have to be careful not to yank the door open with the center plank still pushed out. 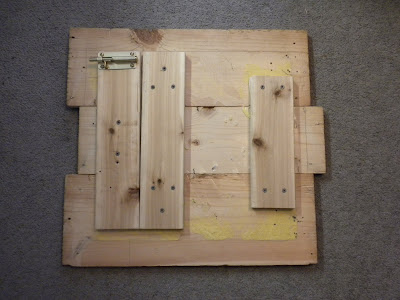 I added a section of 1×4 to the center plank so that bolts could be attached at the top and bottom of the door instead of just the center. I chose to use spring-loaded door bolts so that the door could be opened and closed freely if the bolts were retracted.

The bolts were installed.

The box was closed and opened repeatedly.

And there was much rejoicing.   \o/

(Forgive my creepy breathing, I was a bit sick at the time.)

Start the ball rolling by posting a comment on this article!