Though I was more than happy with the way the first Kindle hardcase turned out, there were still several improvements I wanted to make. First, I was really dissatisfied with having to route out the kindle insets by hand with the router on top of the board. The process was tedious, messy, and altogether unpleasant. I thought I might be able to keep the router in the routing table and make some sort of bounding frame that would allow me to just  slide the case half around on the table. This was a little tricky to set up, but ended up working really well. The resulting insets were cleaner, straighter, and much faster to cut. I don’t have a picture of this setup at the moment, but I’ll get one soon.

The first case was pretty heavy, so the second improvement I wanted to make was to route out both insets a little deeper, allowing thicker foam. This ended up reducing the weight from 1.4kg to 1.1kg with the Kindle inside. 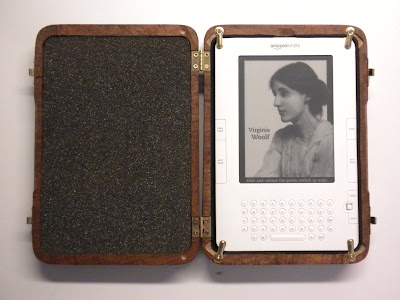 Another major improvement was cutting the Kindle inset big enough for foam around all four edges. 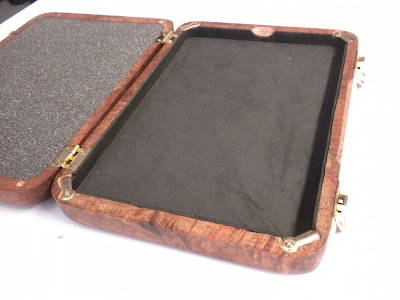 I also wanted something that would keep the Kindle from falling out of the case when it was open. I settled on brass turn buttons and routed out insets for them in all four corners using a dremel. This ended up looking really nice, but it’s a little inconvenient to have to move the top turn buttons to turn the thing on and off. Also, if I leave them engaged when I close the case, they keep the foam on the front side from doing any good. I’m sure there’s a simple solution for this, but I haven’t come up with anything decent yet. 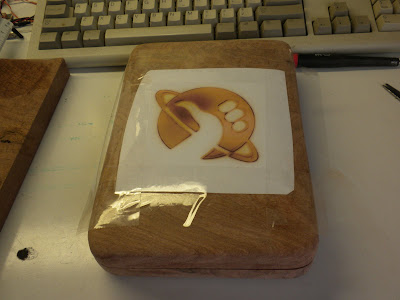 As a nod to this xkcd comic, I wanted to put a Hitchhiker’s Guide graphic on the cover somehow. I printed it out, taped it to the cover, and then outlined it with a thumbtack. 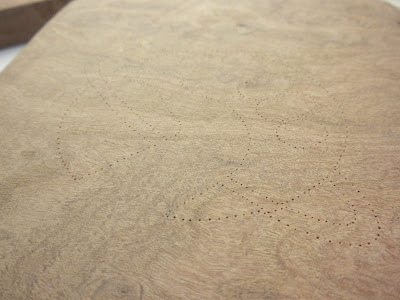 After the paper was removed the little holes were visible enough that I could score the design using a small, flat tool. Unfortunately, the design didn’t end up being quite as visible as I would have liked. 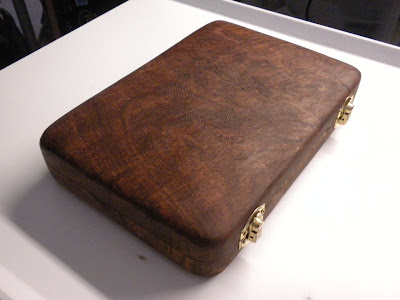 I found a guy that does laser engraving, so I’m going to give that a shot. All in all I think this case is a major improvement over the first one. It’s still a little heavy, and the hinges aren’t aligned quite right, so there’s still some improvements to be made yet, but I think I’m almost done here. A friend of mine has commissioned me to make one for her dad, so maybe this project will even pay for itself!