About a year ago a friend of mine introduced me to the DynaFlex wrist exerciser. I was intrigued by its simple design and clever use of angular momentum, but it didn’t seem useful for much. Then, out of the blue, it occurred to me that this device would make an excellent mini-generator. Since the rotor spins at such a high rate (200-300Hz), the magnets and coils could be small. And unlike the lever-action handheld generators, this would have very few moving parts–no pesky nylon gears to wear down. I’d done a decent amount of reading about wind turbines, and I thought I had a pretty good understanding of how dynamos worked, so I decided to give it a shot. 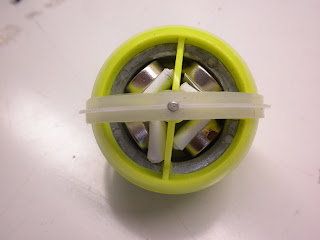 I found a pack of neodymium magnets at Wal-Mart that looked like they’d fit inside the spokes of the rotor, and I bought some 26-gauge wire at a local electronics store. The magnets fit inside the rotor spokes, and I temporarily wedged them in using folded paper. This worked well enough that I would never bother to glue them in. Four magnets could be placed inside the spokes on each side of the rotor, giving eight magnets total. I arranged the magnets so that their polarities alternated every quarter turn. 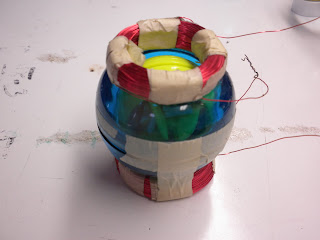 Next, I used a power drill and a screwdriver handle to wind a pair of test coils. The coils were connected in series, taped to the top and bottom of the generator, and the rotor was spun up. Sure enough, a sine wave appeared on the scope. 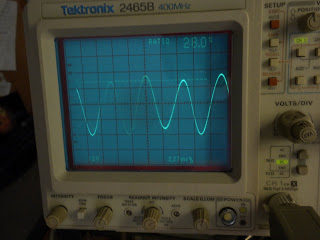 After experimenting with different numbers of winds, I determined that a coil with 320 winds would yield between 3 and 5 volts, depending on how fast the rotor was spun. I wanted a pair of coils that could easily drive a simple linear 5v regulator for USB charging, so I figured two of these in series should work. I made a simple rectifier/5v regulator circuit and scalped a female USB connector from something less interesting. 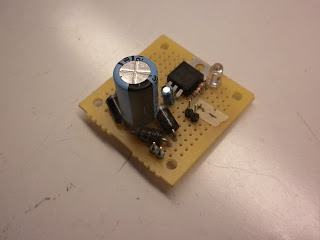 Here’s a rough diagram of the electronics showing the coils and rectifier/capacitor arrangement. This was actually done in a circuit simulator applet I found at http://www.falstad.com/circuit/. I would highly recommend this program to anyone new to electronics, as it really does a good job of showing how current flows through various circuits. The coils themselves only output 1.9 Watts at maximum rotor speed (0.25A at 7.5V), but I think this could be greatly improved by someone who actually knew what they were doing. A more efficient switching regulator and stronger, better-placed magnets would be great improvements. 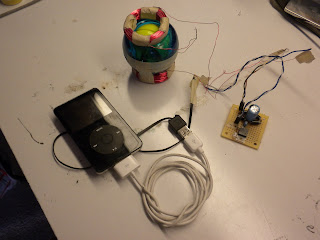